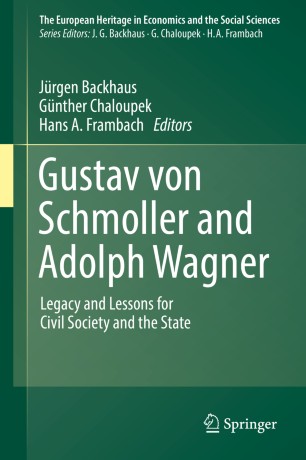 Legacy and Lessons for Civil Society and the State

Part of the The European Heritage in Economics and the Social Sciences book series (EHES, volume 21)

This book discusses the work of German economists Gustav von Schmoller and Adolph Wagner, its influence on the tradition of German and Austrian economic and social thought, and its implications for the discipline today. Schmoller and Wagner integrated philosophical, historical, sociological and political approaches into the science of economics, focusing specifically on economic development. Schmoller, who is considered the head of the second generation of the German Historical School, argued that general propositions of economic theory had to be based on historical-empirical studies. In contrast, Wagner was a systematologist who preferred to start his investigations into economic problems from abstract principles. Schmoller and Wagner share, however, a common focus on institutions and the role of the state; Wagner favored state policy initiatives, while Schmoller was concerned with the risks of state policy failure. One hundred years after their deaths, the contributions to this book look into their approach, trace the influence of their ideas, and explore the relevance of their thought in a global economy.  This book will be useful for students and scholars interested in socio-economics, the history of economic thought, economic policy, and political science.