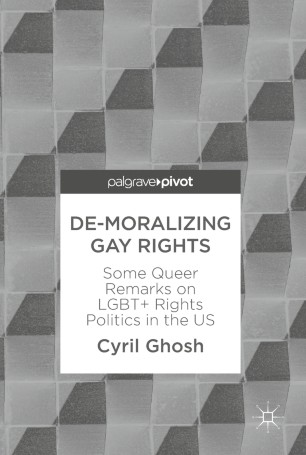 Some Queer Remarks on LGBT+ Rights Politics in the US

This book critically interrogates three sets of distortions that emanate from the messianic core of 21st century public discourse on LGBT+ rights in the United States. The first relates to the critique of pinkwashing, often advanced by scholars who claim to be committed to an emancipatory politics. The second concerns a recent US Supreme Court decision, Obergefell v. Hodges (2015), a judgment that established marriage equality across the 50 states. The third distortion occurs in Kenji Yoshino’s theorization of the concept of gay covering. Each distortion produces its own injunction to assimilate, sometimes into the dominant mainstream and, at other times, into the fold of what is axiomatically taken to be the category of the radical. Using a queer theoretic analysis, I argue for the dismantling of each of these three sets of assimilationist injunctions.