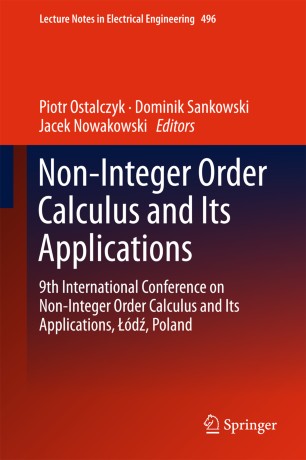 RRNR: Conference on Non-integer Order Calculus and Its Applications

Non-Integer Order Calculus and its Applications

This book focuses on fractional calculus, presenting novel advances in both the theory and applications of non-integer order systems. At the end of the twentieth century it was predicted that it would be the calculus of the twenty-first century, and that prophecy is confirmed year after year. Now this mathematical tool is successfully used in a variety of research areas, like engineering (e.g. electrical, mechanical, chemical), dynamical systems modeling, analysis and synthesis (e.g technical, biological, economical) as well as in multidisciplinary areas (e.g. biochemistry, electrochemistry).
As well as the mathematical foundations the book concentrates on the technical applications of continuous-time and discrete-time fractional calculus, investigating the identification, analysis and control of electrical circuits and dynamical systems. It also presents the latest results.
Although some scientific centers and scientists are skeptical and actively criticize the applicability of fractional calculus, it is worth breaking through the scientific and technological walls. Because the “fractional community” is growing rapidly there is a pressing need for the exchange of scientific results.
The book includes papers presented at the 9th International Conference on Non-integer Order Calculus and Its Applications and is divided into three parts:
•         Mathematical foundations
•         Fractional systems analysis and synthesis
•         System modeling
Seven papers discuss the mathematical foundations, twelve papers address fractional order analysis and synthesis and three focus on dynamical system modeling by the fractional order differential and difference equations. It is a useful resource for fractional calculus scientific community.