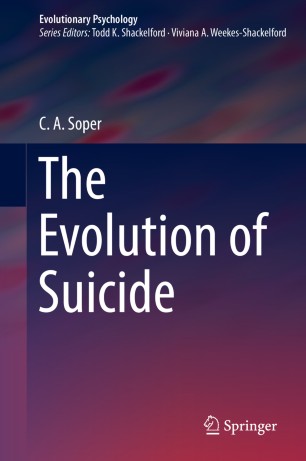 The Evolution of Suicide

This thought-provoking volume offers a distinctly human evolutionary analysis of a distinctly human phenomenon: suicide. Its ‘pain and brain’ model posits animal adaptations as the motivator for suicidal escape, and specific human cognitive adaptations as supplying the means , while also providing a plausible explanation for why only a relatively small number of humans actually take their own lives. The author hypothesizes two types of anti-suicide responses, active and reactive mechanisms prompted by the brain as suicide deterrents. Proposed as well is the intriguing prospect that mental disorders such as depression and addiction, long associated with suicidality, may serve as survival measures.

Among the topics covered:

·         The protection against suicide afforded to animals and young children.

·         Why psychodynamic defenses regulate the experiencing of painful events.

·         Links between suicidality and positive psychology.

·         The anti-suicide role of spiritual and religious belief.

In raising and considering key questions regarding this most controversial act, The Evolution of Suicide will appeal to researchers across a range of behavioral science disciplines. At the same time, the book’s implications for clinical intervention and prevention will make it useful among mental health professionals and those involved with mental health policy.