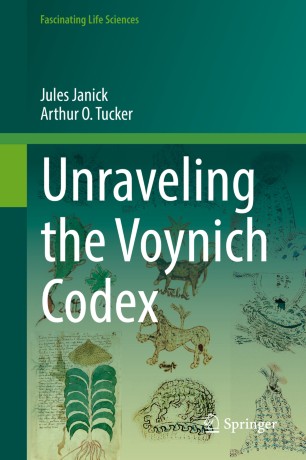 The bizarre Voynich Codex has often been referred to as the most mysterious book in the world.  Discovered in an Italian Catholic college in 1912 by a Polish book dealer Wilfrid Voynich, it was eventually bequeathed to the Beinecke Rare Book and Manuscript Library of Yale University.  It contains symbolic language that has defied translation by eminent cryptologists.  The codex is encyclopedic in scope and contains sections known as herbal, pharmaceutical, balenological (nude nymphs bathing in pools), astrological, cosmological and a final section of text that may be prescriptions but could be poetry or incantations. Because the vellum has been carbon dated to the early 15th century and the manuscript was known to be in the collection of Emperor Rudolf II of the Holy Roman Empire sometime between 1607 and 1622, current dogma had assumed it a European manuscript of the 15th century.  However, based on identification of New World plants, animals, a mineral, as well as cities and volcanos of Central Mexico, the authors of this book reveal that the codex is clearly a document of colonial New Spain.  Furthermore, the illustrator and author are identified as native to Mesoamerica based on a name and ligated initials in the first botanical illustration.  This breakthrough in Voynich studies indicates that the failure to decipher the manuscript has been the result of a basic misinterpretation of its origin in time and place.  Tentative assignment of the Voynichese symbols also provides a key to decipherment based on Mesoamerican languages.  A document from this time, free from filter or censor from either Spanish or Inquisitorial authorities has major importance in our understanding of life in 16th century Mexico.