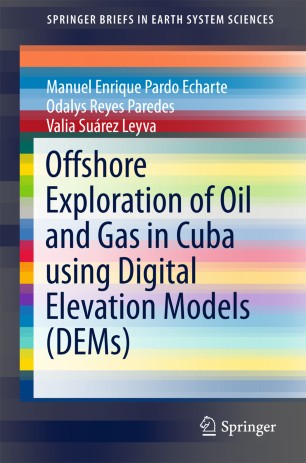 This book provides an overview of the major changes induced by hydrocarbons (HCs) affecting rocks and surface sediments and their implications for non-seismic exploration methods, particularly for marine territories near Cuba. It examines the use of a digital elevation model (DEM) at 90x90m resolution for the detection of subtle, positive geomorphic anomalies related to hydrocarbon microseepage (vertical migration) on possible oil and gas targets. The results support the conclusion that the DEM data provides a low cost and fast offshore oil and gas preliminary exploration strategy. This data is useful serving to focus prospective areas with supplementary unconventional methods such as magnetic-induced polarization (MIP), useful to propose more expensive volumes for detailed 2D–3D seismic surveys.   .

The main author, Manuel E. Pardo Echarte, has more than 40 years of experience in scientific research. He graduated in Geophysical Engineering at José Antonio Echeverría Polytechnic University, Cujae, La Habana, Cuba, in 1974 and obtained a PhD in Mineralogical Geology at the same university in 1987. He is currently an associate professor there and at the University of Havana, Cuba. He has a wide range of publications, including monographs: “Unconventional Methods for Oil & Gas Exploration in Cuba: The Redox Complex” (Springer, 2016) and “Oil and Gas Exploration in Cuba: Geological-Structural Cartography using Potential Fields and Airborne Gamma Spectrometry”(Springer, 2017). He is the author of “Method of Redox Potential Measurement in Soils and Its Combined Application with Kappametry for the Purposes of Geological Prospecting” (2000) and of Redox Complex (2004).

Geophysical Engineer Odalys Reyes Paredes, has 27 years of experience in scientific research. She graduated from the José Antonio Echeverría Polytechnic University, Cujae, La Habana in 1990, and obtained an MSc degree in Applied Geophysics, 2013 from same institution. She is an instructing professor at the José Antonio Echeverría Polytechnic University, Cujae. She has published numerous articles on “Petrophysics” and participated in a series of national and international events and presented more than 20 works.

Valia Suárez Leyva, has 25 years of experience in scientific research. She graduated in Geophysical Engineering from the Plekhanov Institute, St. Petersburg, Russia, in 1990 and received a PM degree in Applied Geophysics from ITC, Enschede, Netherlands in 2001. She is an assistant professor at the University of Havana, Cuba. She has written numerous publications and participated in national and international events