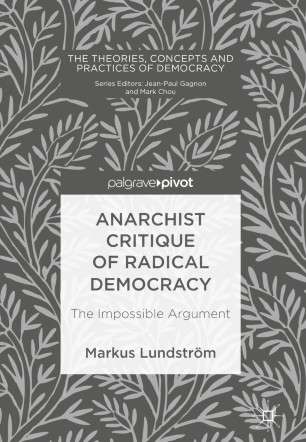 Part of the The Theories, Concepts and Practices of Democracy book series (PSTCD)

“The very best and most fruitful interrogations of political life often come from a deep and scrupulous plunge into a single event. So it is with Markus Lundström’s brilliant analysis of the battle in the streets of Husby in 2013. The result is a subtle, philosophically informed and original understanding of the possibilities for enacting the promise of anarchism.”
–Professor James C. Scott, Yale University, USA
“This is movement-based theorizing at its best. Lundström offers a compelling genealogy that details how anarchism might radicalize democracy, or might have to move entirely beyond it. This is an important book for those wondering what comes next, after alterglobalization, after Occupy, for activists in Europe and North America.”
–Associate Professor Richard Day, Queen's University, Canada
“This book takes seriously tensions within anarchism between making democracy more participatory vs making a more radical arrangement beyond democracy. Lundström exemplifies these tensions, and appeals to a variety of anarchist writers for the theoretical tools to think this tension productively.”
–Professor Kathy E. Ferguson, University of Hawai'i, USA
“Advancing on the anarchist tradition, Lundström's argument is timely, compelling, and deeply grounded in the collective experience of radical democratic contestation. This book deserves wide attention from scholars and activists alike.”
–Assistant Professor Uri Gordon, University of Nottingham, UK
This book addresses the conflictual nature of radical democracy. By analyzing democratic conflict in Husby, a marginalized Stockholm city district, it exposes democracy’s core division – between governors and governed – as theorized by Jacques Rancière. Tracing the genealogy of that critique, the book interrogates a historical tradition generically adverse to every form of governance, namely anarchism. By outlining the divergent and discontinuous relationship between democracy and anarchy – within the history of anarchist thought – the author adds to democratic theory ‘The Impossible Argument’: a compound anarchist critique of radical democracy.