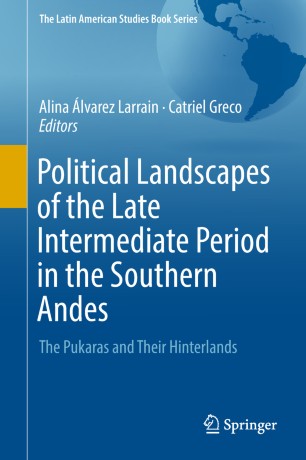 Political Landscapes of the Late Intermediate Period in the Southern Andes

The Pukaras and Their Hinterlands

This book studies the relationship between pukaras and their surrounding landscape, focusing on the architectural and settlement variability registered in both contexts. It is the outcome of a symposium held at the XIX National Congress of Argentine Archaeology (San Miguel de Tucuman, August 8–12, 2016) entitled, "Pukaras, strategic settlements and dispersed settlements: Political landscapes of the Late Intermediate Period in the Southern Andes." Based on the topics discussed at the event, this book presents nine case studies covering a large geographic area within the Southern Andes (northwestern Argentina, northern Chile and southern Bolivia), and breaking the national barriers that tend to atomize pre-Hispanic landscapes.

The respective chapters cover a wide range of themes: from architectural and settlement variability, ways to build and inhabit space, social segmentation and hierarchy; to endemic conflict, analysis of accessibility and visibility, spatiality and temporality of landscapes; as well as new dating. This book goes beyond the Late Intermediate Period (LIP) analyses from the perspective of fortified settlements and material evidence related to war, by placing the focus on how ancient political landscapes were constructed from the relation between the pukaras and other sites as part of the same territory.

The methodologies used include pedestrian surveys, photogrammetric surveys with UAVs (unmanned aerial vehicles) or drones, topographic and architectural surveys, excavations of households, ceramic and rock art analysis, and spatial analysis with geographic information systems (GISs). Given the numerous thematic interconnections between the contributions, the Editors have organized the chapters geographically, moving from south to north: from the southern valleys of Catamarca Province in Argentina to Lipez in the southern part of the Bolivian Altiplano, passing through the Calchaqui valleys of Catamarca, the puna and Quebrada de Humahuaca of Jujuy in northwest Argentina and the Antofagasta region in northern Chile.

The book provides valuable new theoretical and methodological perspectives on the study of political landscapes of the Late Intermediate Period in the Southern Andes .