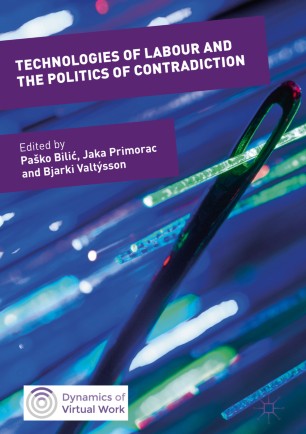 Technologies of Labour and the Politics of Contradiction

‘This book could mark a ‘maturing’ of the digital labour debates, and as such is to be welcomed.’

‘This empirically wide-ranging analysis of the labour-technology relationship could not be more timely or pressing.’

‘An excellent contribution to current debates in the trend toward labour capture in digitalized environments.’

This book is situated in the nexus between technology, labour and politics. It focuses on contradictions as heuristic devices that uncover struggles, frictions and ambiguities of digitalization in work and labour environments. Topics include contradictions in automation, internet platforms, digital practices, creative industries, communication industries, human interaction, democratic participation and regulation. Three cross-cutting themes can be identified within the diverse chapters represented in the book. First, many authors argue that labour and economic valorisation occur outside of the traditional concept of working space and time. Second, digital technology is not fixed under capital. It is malleable and mouldable. Third, many political tensions are occurring without organized awareness or dissent. The book will, therefore, be of interest to researchers and students in the fields of sociology of work, media studies, cultural studies, gender studies, science and technology studies and Critical Theory as well as to trade-unionists and policy makers.