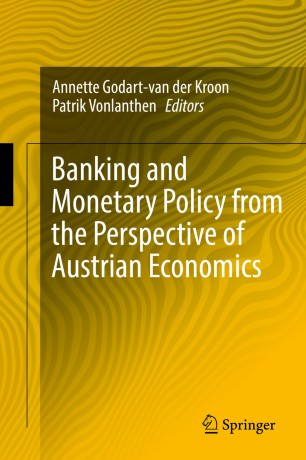 Banking and Monetary Policy from the Perspective of Austrian Economics

This book discusses contemporary banking and monetary policy issues from the perspective of the Austrian School of Economics. Based on the heritage of the Austrian school, leading scholars and practitioners offer a coherent diagnosis and analysis of the factors leading to Europe’s current financial crisis. The first part of the book discusses Ludwig von Mises’s and Friedrich August von Hayek’s ideas on banking and monetary policy from both historical and economic standpoints. It includes contributions on Austrian monetary dynamics and micro-foundational business cycle theory, von Mises’s concepts of liquidity and solvency of fractional-reserve banks, and liberalism of Austrian economics. The second part analyzes the measures taken by the European Central Bank (ECB) in light of the ideas of von Mises and Hayek. It includes contributions on non-neutrality of money, ECB monetary policy, and the future of the ECB. The third and final part presents discussions on monetary reforms, including contributions on Bitcoins, Cryptocurrencies and anti-deflationist Paranoia.