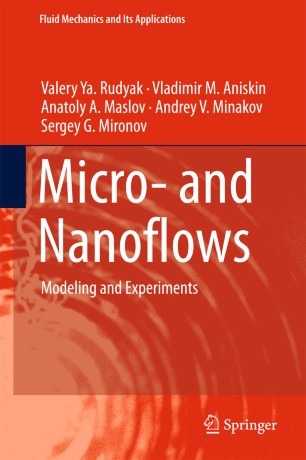 Part of the Fluid Mechanics and Its Applications book series (FMIA, volume 118)

This book describes physical, mathematical and experimental methods to model flows in micro- and nanofluidic devices. It takes in consideration flows in channels with a characteristic size between several hundreds of micrometers to several nanometers. Methods based on solving kinetic equations, coupled kinetic-hydrodynamic description, and molecular dynamics method are used. Based on detailed measurements of pressure distributions along the straight and bent microchannels, the hydraulic resistance coefficients are refined. Flows of disperse fluids (including disperse nanofluids) are considered in detail. Results of hydrodynamic modeling of the simplest micromixers are reported. Mixing of fluids in a Y-type and T-type micromixers is considered. The authors present a systematic study of jet flows, jets structure and laminar-turbulent transition. The influence of sound on the microjet structure is considered. New phenomena associated with turbulization and relaminarization of the mixing layer of microjets are discussed. Based on the conducted experimental investigations, the authors propose a chart of microjet flow regimes. When addressing the modeling of microflows of nanofluids, the authors show where conventional hydrodynamic approaches can be applied and where more complicated models are needed, and they analyze the hydrodynamic stability of the nanofluid flows. The last part of the book is devoted the statistical theory of the transport processes in fluids under confined conditions. The authors present the constitutive relations and the formulas for transport coefficients. In conclusion the authors present a rigorous analysis of the viscosity and diffusion in nanochannels and in porous media.