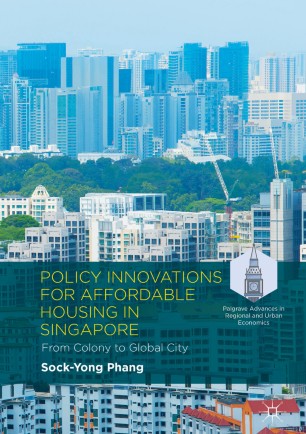 From Colony to Global City

“This book tells how public authorities in Singapore designed and adapted policies for allocating land, capital, and labor in order to create good places for Singapore citizens and residents to live and work, setting the infrastructure for people in Singapore to create a poster-child East Asia economic miracle of the late 20th century…..The book is among other things a fascinating analytical economic history about how Singapore purposefully deployed a suite of interrelated public policies about land use, life cycle savings, taxation, regulation, and ethnic toleration.”

“Rich in facts, data, and scholarly analyses, this book tells a fascinating story of Singapore’s affordable housing policy. It eloquently demonstrates that the objective of affordable housing is achievable. Global cities around the world struggling from declining housing affordability could learn a lot from Singapore’s success.”

“Which country gets the housing market right? This is a question that experts very often get at conferences, gatherings, and during interviews. And usually “Singapore” comes up as one of the answers. Sock-Yong Phang does an excellent job in sharing her knowledge on Singapore’s housing market, and on what has and has not worked.”

Global cities today are facing fundamental challenges in relation to unaffordable housing and growing economic inequality. Singapore’s success in making homeownership possible for 90% of its population has attracted much attention internationally. This book represents a culmination of research by the author on key housing policy innovations for affordable housing.

Housing policy changes were effected in the 1960s through reforms of colonial legislation and institutions dealing with state land acquisition, public housing, and provident fund savings. The comprehensive housing framework that was established enabled the massive resettlement of households from shophouses, slums and villages to high-rise government-built flats. In the 1980s and 1990s, housing market and land use regulations were amended in response to the changing needs of a growing economy.

Housing policies have also been utilised to curb housing speculation, build racially inclusive communities, and reduce wealth inequality. More recently, an ageing population of homeowners has necessitated focus on policies for housing equity extraction. This landmark title is of relevance to all developing economies exploring alternative systems of affordable housing.

Sock-Yong Phang is Celia Moh Chair Professor of Economics at the Singapore Management University, Singapore. She is the author of Housing Finance Systems: Market Failures and Government Failures (Palgrave Macmillan, 2013), as well as numerous publications on housing, urban transportation and public-private partnerships in scholarly journals.