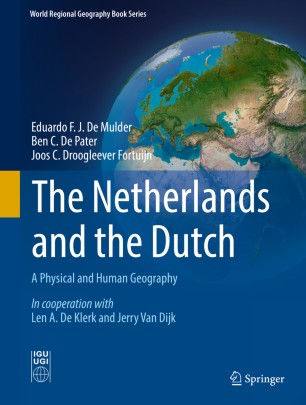 The Netherlands and the Dutch

A Physical and Human Geography

This book presents a geographical survey of the Netherlands, reviewing recent and historic developments that made the nation. It is a relatively wealthy country and the Dutch belong to the happiest and healthiest on earth. But these qualities are not evenly spread over the country. The urban agglomeration of Randstad Holland in the west hosts most of the nation’s capital and young, well-educated people whereas older and less-educated people are concentrated in the peripheral areas in the north, east and south.

Interactions between physical and human geographical aspects of the Netherlands are described quite extensively. Its position on one of Europe’s most prominent deltas, its abundance of energy resources and the course of history have all contributed to its present national position and international networks. But early and recent Dutch have also shaped this country. They reclaimed lakes and shallow seas, protected the lowlands against floods, re-allotted land parcels and designed and developed urban areas. Besides its focus on water-related topics, the book also covers social and cultural aspects. The book also discusses future challenges and offers scenarios for solutions.

This is a book for those interested in a wide variety of recent aspects of the geography of the Netherlands described in a historical context. It appeals to students and researchers of many disciplines in geography, urban and landscape planning, water management, history and cultural studies.