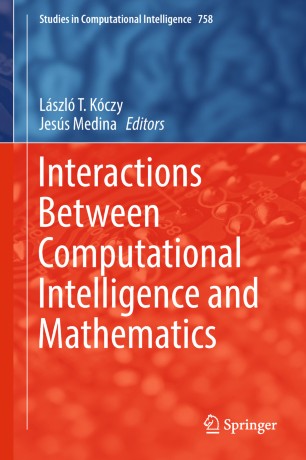 Interactions Between Computational Intelligence and Mathematics

This book presents recent research in the field of interaction between computational intelligence and mathematics, ranging from theory to applications. Computational intelligence, or soft computing consists of various bio-inspired methods, especially fuzzy systems, artificial neural networks, evolutionary and memetic algorithms. These research areas were initiated by professionals in various applied fields, such as engineers, economists, and financial and medical experts. Although computational intelligence offered solutions (at least quasi-optimal solutions) for problems with high complexity, vague and undeterministic features, initially little attention was paid to the mathematical models and analysis of the methods successfully applied. A typical example is the extremely successful Mamdani-algorithm, and its modifications and extensions, applied since the mid-1970s, where the first analysis of the simplest cases, showing why this algorithm was so efficient and stable, was not given until the early 1990s.
Since the mid-2000s, the authors have organized international conferences annually to focus on the mathematical methodological issues in connection with computational intelligence approaches. These conferences have attracted a large number of submissions with a wide scope of topics and quality. The editors selected several high-quality papers and approached the authors to submit an essentially extended and improved book chapter based on the lectures.
This volume is the first contributed book on the subject.