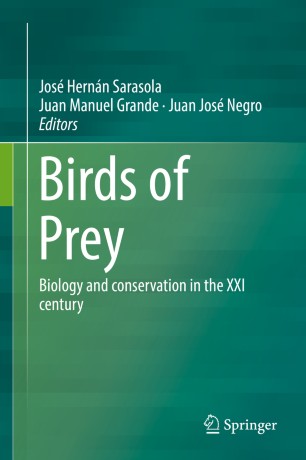 Biology and conservation in the XXI century

This book will provide the state-of-the-art research on topics involved in the ecology and conservation of birds of prey. With chapters authored by the most recognized and prestigious researchers on each of the fields, this book will become an authorized reference volume for raptor biologists and researchers around the world.

José Hernán Sarasola received his degree in Natural Resources from the National University of La Pampa (UNLPam), Argentina, and earned his Ph.D. in Biology at the University of Seville (Spain) after being granted a doctoral fellowship at the Doñana Biological Station. He is one of the co-founders of the Center for the Study and Conservation of Birds of Prey in Argentina (CECARA) where he has served as vice-director and director. He has conducted field research on a variety of species in South America and Europe focusing on raptor population ecology, migration and conservation. He is a researcher at the National Scientific and Technical Research Council of Argentina (CONICET) and adjunct professor of Ecology at UNLPam. He has been visiting scholar at University of Saskatchewan (Canada) and the Autonomous University of Madrid (Spain).

Juan Manuel Grande has a B.S. degree in Biology from the Universidad de Barcelona and Ph.D in Biology from the University of Seville, both in Spain. He’s been a postdoc researcher at the University of Saskatchewan, in Canada and is a researcher at the National Scientific and Technical Research Council of Argentina (CONICET). He is vice director of the Center for the Study and Conservation of Raptors in Argentina (CECARA) and professor of Biology at the Universidad Nacional de La Pampa. He has served as Director at Large of the Raptor Research Foundation. His main research interests are linked to birds of prey ecology and the effects of anthropic transformation on natural landscapes on this group of birds.

Juan José Negro’s research interests focus on evolutionary ecology and conservation of endangered birds of prey. He is an associate editor of ‘Animal Biodiversity and Conservation’ and the ‘Journal of Unmanned Vehicle Systems’. He is also vice-president of the Spanish Society of Ethology and Evolutionary Ecology. Negro graduated from the Faculty of Biology at the University of Sevilla, where he later earned a PhD in Biology. He has been a visiting scholar at CalPoly, California, and Heidelberg University, Germany. He held a postdoc position at McGill University, Canada and was director of Doñana Biological Station. Negro is a professor of research at the Spanish Council for Scientific Research. He received the Hamerstrom Award from The Raptor Research Foundation in recognition of his contributions to the understanding of raptor ecology and natural history.