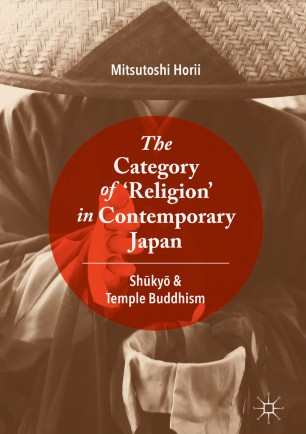 The Category of ‘Religion’ in Contemporary Japan

This book critically examines the term ‘religion’ (shūkyō) as a social category within the sociological context of contemporary Japan. Whereas the nineteenth-century construction of shūkyō has been critically studied by many, the same critical approach has not been extended to the contemporary context of the Japanese-language discourse on shūkyō and Temple Buddhism. This work aims to unveil the norms and imperatives which govern the utilization of the term shūkyō in the specific context of modern day Japan, with a particular focus upon Temple Buddhism. The author draws on a number of popular publications in Japanese, many of which have been written by Buddhist priests. In addition, the book offers rich interview material from conversations with Buddhist priests.

Readers will gain insights into the critical deconstruction, the historicization, and the study of social classification system of ‘religion’, in terms of its cross-cultural application to the contemporary Japanese context. The book will be of interest to students and scholars across a range of disciplines including Japanese Studies, Buddhology, Religious Studies, Social Anthropology, and Sociology.

“Mitsutoshi Horii’s The Category of ‘Religion’ in Contemporary Japan raises fundamental questions about researching religion that should be of interest for anyone in the field, and can definitely be recommended for anyone interested in ‘religion’ in Japan, or anywhere else for that matter. It was probably not Horii’s intention, but I must admit that reading the book has taught me a lot about ‘religion’ in Japan.” (Daniel Enstedt, Nordic Journal of Religion and Society, Vol. 32 (2), 2019)

“Horii combines in his book a critical reading of written materials with a solid sociological fieldwork conducted among Buddhist priests of the Nichiren sect of Temple Buddhism. … Horii’s work has a number of strengths which makes it an important contribution to the critical study of religion in Japan.” (Ernils Larsson, Contemporary Japan, December 10, 2018)
Buy options