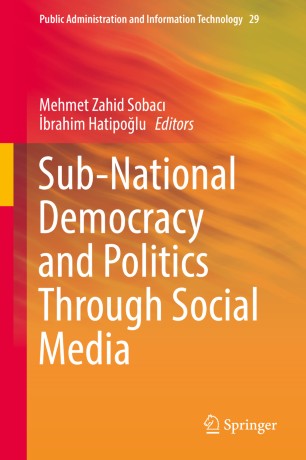 Th is book analyzes the impact of social media on democracy and politics at the subnational
level in developed and developing countries. Over the last decade or so, social
media has transformed politics. Off ering political actors opportunities to organize, mobilize,
and connect with constituents, voters, and supporters, social media has become
an important tool in global politics as well as a force for democracy. Most of the available
research literature focuses on the impact of social media at the national level; this book
fills that gap by analyzing the political uses of social media at the sub-national level.
Th e book is divided into two parts. Part One, “Social Media for Democracy” includes
chapters that analyze potential contributions of social media tools to the realizing of
basic values of democracy, such as public engagement, transparency, accountability,
participation and collaboration at the sub-national level. Part Two, “Social Media in
Politics” focuses on the use of social media tools by political actors in political processes
and activities (online campaigns, protests etc.) at the local, regional and state
government levels during election and non-election periods. Combining theoretical
and empirical analysis, each chapter provides evaluations of overarching issues, questions,
and problems as well as real-world experiences with social media, politics, and
democracy in a diverse sample of municipalities. Th is volume will be of use to graduate
students, academicians, and researchers, in several disciplines and fi elds, such as public
administration, political science, ICT, sociology, communication studies and public
policy as well as politicians and practitioners.