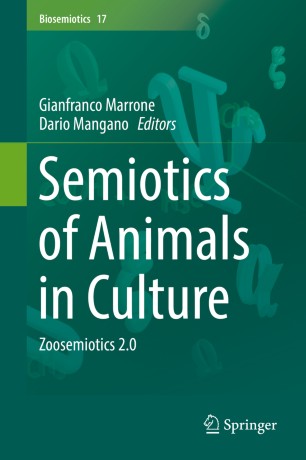 Semiotics of Animals in Culture

To place animals within the realm of nature, means inserting them among the articulations of culture and the social. Semiotics has never avoided this chiasmus, choosing to deal from the outset with the problem of the languages of animals following the old admonition of Montaigne: it is not that animals do not talk, it is us who do not understand them.

Recent research in the field of the anthropology of nature and sociology of sciences and techniques allow to think about the Zoosemiotic issue in a different way. Instead of transplanting the language structures – gestures, LIS, etc. – for a semiotic study of the forms of the human and social meaning, it seems more apt to look at their discourse, and as such, the actual interactions, communicative and scientific as well as practical and functional, between humans and non-humans. This book aims to investigate precisely this hypothesis, known here as Zoosemiotics 2.0, working on several fronts and levels:

· Languages of the image and visual representations, from art history to cinema

· Old and new media. From literature to comics, from cartoons to TV documentaries but also advertising, music, Web and social networks. All those cultural products that talk about the role of human and non-human in society implicitly proposing (and in some way imposing) a form of articulation of such a relationship.

His research interests include Mass-Media Studies, Aesthetics and Literary Theory from a Semiotic perspective. His research in the field of Semio-Aesthetics primarily deals with the nexus between signification and perception. His most recent works have made an innovative contribution to the fields of socio-semiotics applied to food, brand, cities, journalism, space, politics, advertisement, fashion, and TV.

Selected publications in English: The Invention of the Text, London, Mimesis international 2014; Ludovico's Cure. On Body and Music in A Clockwork Orange, Toronto, Legas 2009.