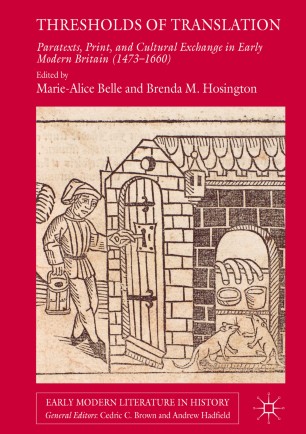 This volume revisits Genette’s definition of the printed book’s liminal devices, or paratexts, as ‘thresholds of interpretation’ by focussing specifically on translations produced in Britain in the early age of print (1473-1660). At a time when translation played a major role in shaping English and Scottish literary culture, paratexts afforded translators and their printers a privileged space in which to advertise their activities, display their social and ideological affiliations, influence literary tastes, and fashion Britain’s representations of the cultural ‘other’.
Written by an international team of scholars of translation and material culture, the ten essays in the volume examine the various material shapes, textual forms, and cultural uses of paratexts as markers (and makers) of cultural exchange in early modern Britain.
The collection will be of interest to scholars of early modern translation, print, and literary culture, and, more broadly, to those studying the material and cultural aspects of text production and circulation in early modern Europe.