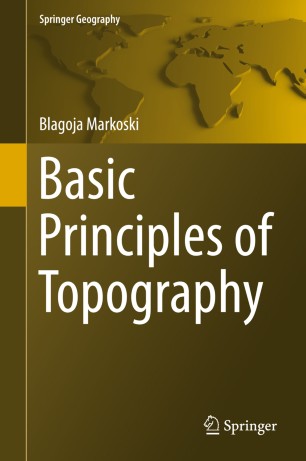 This book gives a comprehensive overview of all relevant elements in topography and their practical application. It elaborates on the classical representation of terrain on maps such as cartographic projections, together with their classification, scale, and geographical elements. It is richly illustrated with photographs, maps and figures, in which the theoretical explanations are clarified.

Readers will become acquainted with the physical characteristics of the ground, i.e. tectonic and erosive shapes, the importance and classification of terrain, genetic (fluvial, abrasive, glacial, karst) and topographic types such as higher (mountains, hills, peaks) and lower terrain (valleys, fields). In addition, the book discusses cartometry and coordinate systems, orientation in space (geographic, topographic, tactical) including by means of maps, instruments and the night sky and elaborates new techniques and technologies such as aerial photogrammetric imagery, global navigation satellite systems and LiDAR.

The book also includes methods for the practical execution of concrete measurement operations, such as determining position and movement on land with maps, compass and azimuth which makes it especially useful for practitioners and professionals, e.g., for landscape planning, military exercises, mountaineering, nature walks etc. As such it offers a valuable guide not only for undergraduate students but also for researchers in the fields of geography, geosciences, geodesy, ecology, forestry and related areas looking for an overview on topography. Uniquely, the book also features an extensive glossary of topographical terms.

Blagoja Markoski is full professor at the Institute of Geography of the Ss. Cyril and Methodius University in Skopje, Macedonia. Prof. Markoski has wide experience in teaching and giving tutorials in the fields of cartography, GIS, geography of population and settlements, military geography, informatics, economical geography, regional geography and others.
His main areas of scientific interest include: cartography, thematic mapping, and GIS. He further has expertise in regional geography and different physical-geographical and socio-economic and geographical issues related to cartography.

He has published more than 147 articles in various national and international journals and another 40 papers in proceedings of symposiums and congresses. On scientific events he has presented over 45 scientific papers. He has published four monographs and 53 thematic maps.

Prof. Markoski is author of three college textbooks and has authorized three scripts, one High School textbook and three textbooks for Elementary Schools.

So far, he has participated over 20 research projects, of which on eight as leading party and head of the project.

He has visited several institutes abroad in Melbourne, Belgrade, Sofia, Ljubljana, Paris and Budapest. As an expert in geographic names from Macedonia, on several occasions he participated in the work of the bodies for geographical names in the United Nations in Geneva, New York and Budapest.

He held several positions at the Faculty of Natural Sciences and Mathematics of the University of Skopje. He was President of the Council of the Faculty (1998/1999), Vice Dean for Finances (1999/2

“Each chapter is followed by references and by pertinent review questions for professionals and students alike. An extensive topographic glossary and a long list of common geomorphic symbols are two more useful additions to the scholarly apparatus. Charts and data summaries are especially appropriate, and the illustrations in the book are outstanding. … The book is a valuable guide to practitioners and professionals in the fields of engineering, geography, geosciences, ecology, and forestry, and to teachers in universities.” (T. L. T. Grose, Choice, Vol. 56 (03), November, 2018)​
Buy options