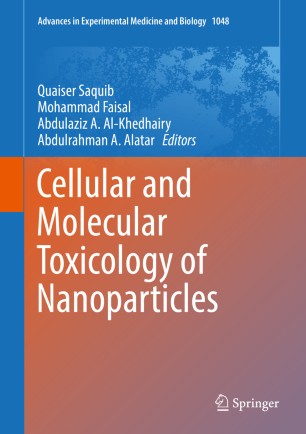 Cellular and Molecular Toxicology of Nanoparticles

Part of the Advances in Experimental Medicine and Biology book series (AEMB, volume 1048)

This edited book is a compilation of findings on the molecular and cellular toxicity of nanoparticles (NPs) in animal cell, human cells, invertebrates. The varied selection of test models will provide better understanding about the horizon of NPs toxicity. Interaction of NPs with cells and its organelles can induce toxicological consequences, including transcriptional and translational alterations, DNA damage, cytotoxicity, oxidative stress, mitochondrial dysfunction and cell death. NPs can get internalized in cells through phagocytosis, macropinocytosis, receptor-mediated endocytosis and passive penetration, which can affect varied cell types.

Readers will be benefited with the compilations on basic and molecular facet of NPs toxicity. The chapters will provide a comprehensive information on the state-of-the-art methodologies. The application of toxicogenomic approaches, which is already established in nanotoxicology, has been given special consideration to unravel the toxicodynamics of nanomaterials. Among these approaches, the high-throughput RNA sequencing (RNA-Seq), which is able to build a complete map of transcriptome across different cell types and perturbations upon NPs exposure has been included. The readers are also introduced to the less studied topic on the adsorption of biomolecules (mainly proteins) on the NPs surface, constituting the so-called “biomolecular corona”.

The book has been designed for scientists engaged in NPs toxicity research. Nonetheless, it should be of interest to a variety of scientific disciplines including marine biology, environmental pollution, genetics, pharmacology, medicine, drug and food material sciences, consumer products. Also, the compilations will be of interest to the environmental watchdogs, federal regulators, risk assessors and the policy makers.