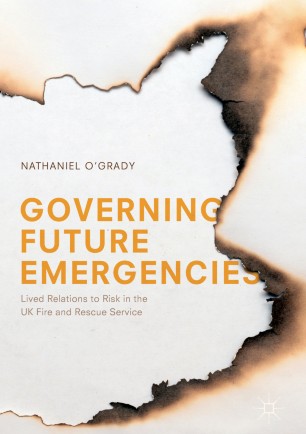 Lived Relations to Risk in the UK Fire and Rescue Service

Through an exploration of the United Kingdom Fire and Rescue Service (FRS), this book examines how the emergence of digital technologies, combined with a policy emphasis on risk, have fundamentally transformed the way society is secured against emergencies. Forms of anticipatory governance have developed in which interventions are made in the present but are oriented towards, and justified through, digitally rendered visions of future contingencies. At the same time, risk is understood as a ‘lived relation’: a set of pervasive knowledge found to cut across and constitute everyday life in the FRS. It is by inquiring into such practices and the new modes of power they support that the book engages with, investigates and conceptualises anew some of the key geo-political issues that characterize security and emergency governance.
Appealing to scholars interested in risk, digital technologies and their involvement in matters of governance, the book outlines the forms of knowledge now deployed to make sense of and govern the future. It demonstrates the affective and material forces enrolled in emergency governance and elaborates on the range of temporal entanglements that underpin actions taken to govern emergencies yet to unfold. Ultimately the book explores the genealogies inscribed into risk's present mobilisation and asks the reader to consider how we are made subject to forms of governance oriented towards the future?