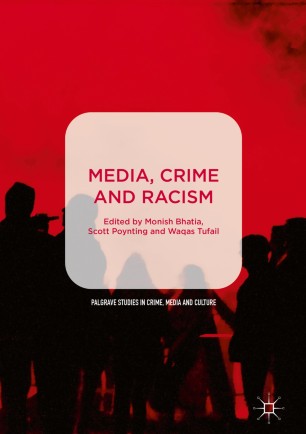 Part of the Palgrave Studies in Crime, Media and Culture book series (PSCMC)

​Media, Crime and Racism draws together contributions from scholars at the leading edge of their field across three continents to present contemporary and longstanding debates exploring the roles played by media and the state in racialising crime and criminalising racialised minorities. Comprised of empirically rich accounts and theoretically informed analysis, this dynamic text offers readers a critical and in-depth examination of contemporary social and criminal justice issues as they pertain to racialised minorities and the media. Chapters demonstrate the myriad ways in which racialised ‘others’ experience demonisation, exclusion, racist abuse and violence licensed – and often induced – by the state and the media. Together, they also offer original and nuanced analysis of how these processes can be experienced differently dependent on geography, political context and local resistance. This collection critically reflects on a number of globally significant topics including the vilification of Muslim minorities, the portrayal of the refugee ‘crisis’ and the representations and resistance of Indigenous and Black communities. This volume demonstrates that processes of racialisation and criminalisation in media and the state cannot be understood without reference to how they are underscored and inflected by gender and power. Above all, the contributors to this volume demonstrate the resistance of racialised minorities in localised contexts across the globe: against racialisation and criminalisation and in pursuit of racial justice.