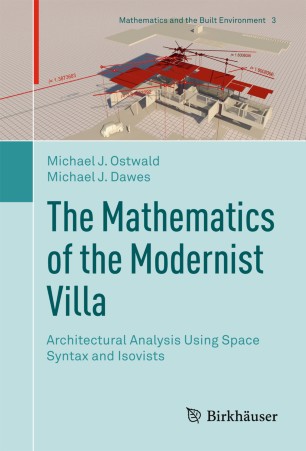 The Mathematics of the Modernist Villa

Part of the Mathematics and the Built Environment book series (MABE, volume 3)

This book presents the first detailed mathematical analysis of the social, cognitive and experiential properties of Modernist domestic architecture.

The Modern Movement in architecture, which came to prominence during the first half of the twentieth century, may have been famous for its functional forms and machine-made aesthetic, but it also sought to challenge the way people inhabit, understand and experience space. Ludwig Mies van der Rohe’s buildings were not only minimalist and transparent, they were designed to subvert traditional social hierarchies. Frank Lloyd Wright’s organic Modernism not only attempted to negotiate a more responsive relationship between nature and architecture, but also shape the way people experience space. Richard Neutra’s Californian Modernism is traditionally celebrated for its sleek, geometric forms, but his intention was to use design to support a heightened understanding of context. Glenn Murcutt’s pristine pavilions, seemingly the epitome of regional Modernism, actually raise important questions about the socio-spatial structure of architecture.

Rather than focussing on form or style in Modernism, this book examines the spatial, social and experiential properties of thirty-seven designs by Wright, Mies, Neutra and Murcutt. The computational and mathematical methods used for this purpose are drawn from space syntax, isovist geometry and graph theory. The specific issues that are examined include: the sensory and emotional appeal of space and form; shifting social and spatial structures in architectural planning; wayfinding and visual understanding; and the relationship between form and program.