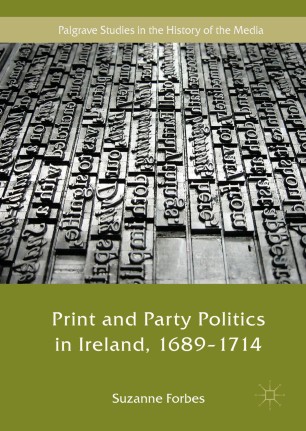 This book is the first full-length study of the development of Irish political print culture from the Glorious Revolution of 1688-9 to the advent of the Hanoverian succession in 1714. Based on extensive analysis of publications produced in Ireland during the period, including newspapers, sermons and pamphlet literature, this book demonstrates that print played a significant role in contributing to escalating tensions between tory and whig partisans in Ireland during this period. Indeed, by the end of Queen Anne’s reign the public were, for the first time in an Irish context, called upon in printed publications to make judgements about the behaviour of politicians and political parties and express their opinion in this regard at the polls. These new developments laid the groundwork for further expansion of the Irish press over the decades that followed.