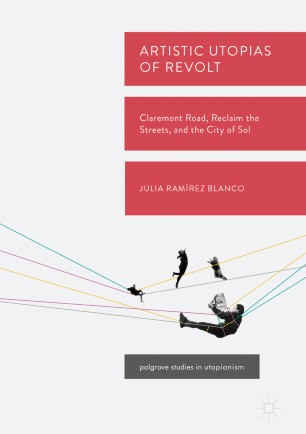 Claremont Road, Reclaim the Streets, and the City of Sol

Part of the Palgrave Studies in Utopianism book series (PASU)

This book analyses the aesthetic and utopian dimensions of various activist social movements in Western Europe since 1989. Through a series of case studies, it demonstrates how dreams of a better society have manifested themselves in contexts of political confrontation, and how artistic forms have provided a language to express the collective desire for social change.
The study begins with the 1993 occupation of Claremont Road in east London, an attempt to prevent the demolition of homes to make room for a new motorway. In a squatted row of houses, all available space was transformed and filled with elements that were both aesthetic and defensive – so when the authorities arrived to evict the protestors, sculptures were turned into barricades. At the end of the decade, this kind of performative celebration merged with the practices of the antiglobalisation movement, where activists staged spectacular parallel events alongside the global elite’s international meetings. As this book shows, social movements try to erase the distance that separates reality and political desire, turning ordinary people into creators of utopias. Squatted houses, carnivalesque street parties, counter-summits, and camps in central squares, all create a physical place of these utopian visions

Julia Ramírez-Blanco is Lecturer at Barcelona University, Spain. Her work revolves around the relationships between art, utopia and activism. Researching in various institutions in Europe and the USA, her publications have appeared in English, French, Italian and Spanish in various co-authored books and journals.