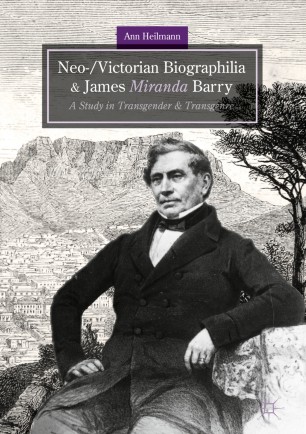 A Study in Transgender and Transgenre

Senior colonial officer from 1813 to 1859, Inspector General James Barry was a pioneering medical reformer who after his death in 1865 became the object of intense speculation when rumours arose about his sex. This cultural history of Barry’s afterlives in Victorian to contemporary (neo-Victorian) life-writing (‘biographilia’) examines the textual and performative strategies of biography, biofiction and biodrama of the last one and a half centuries. In exploring the varied reconstructions and re-imaginations of the historical personality across time, the book illustrates (not least with its cover image) that the ‘real’ James Barry does not exist, any more than does the ‘faithful’ biographical, biofictional or biodramatic rendering of a life in a generically ‘stable’ and discrete form. What Barry represents and how he is represented invariably pinpoints the imaginative, the speculative and the performative: reflections and refractions in the looking glass of genre. Just as ‘James Miranda Barry’, as a subject of cultural inquiry, comes into being and remains in view in the act of crossing gender, so neo-Victorian life-writing constitutes itself through similar acts of boundary transgression. Transgender thus finds its most typical expression in transgenre.