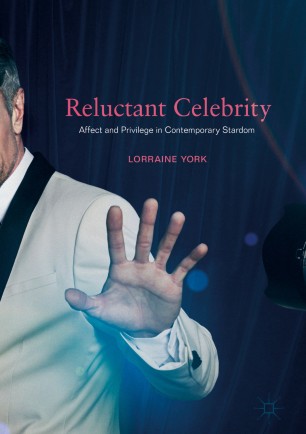 Affect and Privilege in Contemporary Stardom

In this book, Lorraine York examines the figure of the celebrity who expresses discomfort with his or her intense condition of social visibility. Bringing together the fields of celebrity studies and what Ann Cvetkovich has called the “affective turn in cultural studies”, York studies the mixed affect of reluctance, as it is performed by public figures in the entertainment industries. Setting aside the question of whether these performances are offered “in good faith” or not, York theorizes reluctance as the affective meeting ground of seemingly opposite emotions: disinclination and inclination. The figures under study in this book are John Cusack, Robert De Niro, and Daniel Craig—three white, straight, cis-gendered-male cinematic stars who have persistently and publicly expressed a feeling of reluctance about their celebrity. York examines how the performance of reluctance, which is generally admired in celebrities, builds up cultural prestige that can then be turned to other purposes.

“Bringing theories of affect to bear on celebrity studies, Reluctant Celebrity offers fascinating new insights into the star personas of three major male Hollywood stars: John Cusack, Robert De Niro and Daniel Craig. In a highly readable, insightful and erudite book, York explores the cultural importance of the figure of the “reluctant celebrity’ in neoliberal culture. If you have an interest in celebrity studies, masculinity, stars, popular culture, and film, you should read this book.” (Dr Tanya Horeck, Reader in Film, Media & Culture, Anglia Ruskin University, UK. Author of Public Rape: Representing Violation in Fiction and Film (2004) and co-editor of The New Extremism in Cinema: From France to Europe, 2011)