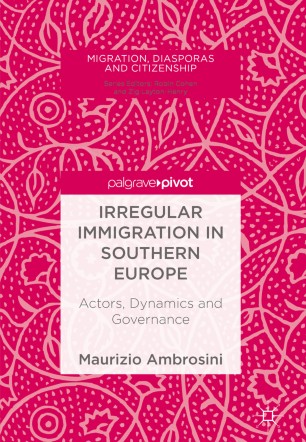 Part of the Migration, Diasporas and Citizenship book series (MDC)

Focusing on the dynamics of irregular immigration in Southern EU Member States, this book analyses how the phenomenon is managed at national and local levels in different legal and political systems. In doing so, it answers vital policy questions regarding the continued existence of irregular migration, pathways to legality, and relations between unauthorized migrants and receiving societies.
The author argues that while the economic crisis and migrant flows coming from the South and East of the Mediterranean Sea have called this regime into question, it is the needs of labour markets in Southern Europe and compliance with European Union rules that has had a more dominant effect. The particular manner in which labour markets, political actors, social institutions, and migrants’ networks intersect are shown to be distinctive features of the migration regime in this region.
Describing bordering and debordering practices, from the island of Lampedusa to local communities in distant regions, this book brings fresh insights to urgent areas of debate within the field. It analyses why many irregular immigrants are socially accepted, such as women who perform domestic and care activities, whereas others are rejected and marginalized, as is often the case for asylum seekers, despite having permission to reside.
Drawing together twenty years of research and addressing the current crisis, it will appeal to policy-makers, students and scholars of migration.