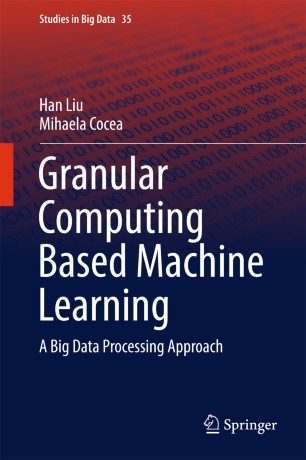 This book explores the significant role of granular computing in advancing machine learning towards in-depth processing of big data. It begins by introducing the main characteristics of big data, i.e., the five Vs—Volume, Velocity, Variety, Veracity and Variability. The book explores granular computing as a response to the fact that learning tasks have become increasingly more complex due to the vast and rapid increase in the size of data, and that traditional machine learning has proven too shallow to adequately deal with big data.
Some popular types of traditional machine learning are presented in terms of their key features and limitations in the context of big data. Further, the book discusses why granular-computing-based machine learning is called for, and demonstrates how granular computing concepts can be used in different ways to advance machine learning for big data processing. Several case studies involving big data are presented by using biomedical data and sentiment data, in order to show the advances in big data processing through the shift from traditional machine learning to granular-computing-based machine learning. Finally, the book stresses the theoretical significance, practical importance, methodological impact and philosophical aspects of granular-computing-based machine learning, and suggests several further directions for advancing machine learning to fit the needs of modern industries.
This book is aimed at PhD students, postdoctoral researchers and academics who are actively involved in fundamental research on machine learning or applied research on data mining and knowledge discovery, sentiment analysis, pattern recognition, image processing, computer vision and big data analytics. It will also benefit a broader audience of researchers and practitioners who are actively engaged in the research and development of intelligent systems.

He has been registered as a reviewer for several established journals, such as IEEE Transactions on Fuzzy Systems, and Information Sciences (Elsevier). He has also recently been a member of the programme committee for the 17th UK Workshop on Computational Intelligence (UKCI 2017), the 16th International Conference on Machine Learning and Cybernetics (ICMLC 2017) and the 2nd IET International Conference on Biomedical Image and Signal Processing (ICBISP 2017). He is a member of IEEE and IET.

Her research interests are in the area of Intelligent System, focusing on intelligent techniques using data and knowledge engineering to provide adaptation and personalisation, as well as decision support. She has received funding through: (a) scholarships from the National College of Ireland and Birkbeck College, University of London, UK; (b) an internship through the EU Leonardo da Vinci programme; (b) a mobility fellowship from the European Network of Excellence in Technology Enhanced Learning (STELLARnet); (c) research development funds from the University of Portsmouth and (d) travel grants from EATEL (European Association for Technology Enhanced Learning), User Modeling Inc. and NSF (National Science Foundation).

She has published over 75 peer-reviewed papers and has received a Best Project Award at the Summer School on Personalized e-Learning, Dublin (2006), a Best PhD paper award at the 14th International Conference on Knowledge-Based and Intelligent Information & Engineering Systems (2010) and was runner up for the 2011 Best PhD Thesis in the School of Business, Economics & Informatics, Birkbeck College, University of London. She acted as co-chair for the “Architectures, techniques & methodologies for UMAP” track of the 24th ACM Conference on User Modeling, Adaptation and Personalisation (UMAP 2016), the Workshop on Social Media Analysis in conjunction with the 33rd International Conference of the British Computer Society's Specialist Group on Artificial Intelligence (SGAI 2013), and the International Workshop on Sentiment Discovery from Affective Data (SDAD) in conjunction with the European Conference on Machine Learning and Principles and Practice of Knowledge Discovery in Databases (ECML PKDD 2012). She is a member of the IEEE and the IEEE System, Man and Cybernetics Society.