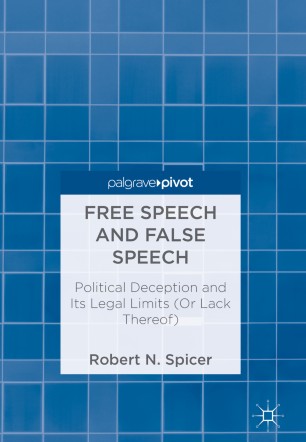 Political Deception and Its Legal Limits (Or Lack Thereof)

This book examines the history of the legal discourse around political falsehood and its future in the wake of the 2012 US Supreme Court decision in US v. Alvarez through communication law, political philosophy, and communication theory perspectives. As US v. Alvarez confirmed First Amendment protection for lies, Robert N. Spicer addresses how the ramifications of that decision function by looking at statutory and judicial handling of First Amendment protection for political deception. Illustrating how commercial speech is regulated but political speech is not, Spicer evaluates the role of deception in politics and its consequences for democracy in a contemporary political environment where political personalities, partisan media, and dark money donors bend the truth and abuse the virtue of free expression.

Robert N. Spicer is Assistant Professor of Digital Journalism at Millersville University, USA. His work has been published in journals such as the Journal of Media Education, Techne: Research in Philosophy and Technology, and the Jefferson Journal of Science and Culture.