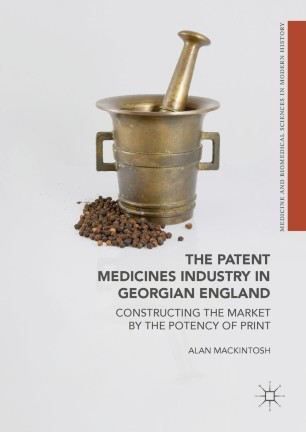 Constructing the Market by the Potency of Print

In this book, the ownership, distribution and sale of patent medicines across Georgian England are explored for the first time, transforming our understanding of healthcare provision and the use of the printed word in that era. Patent medicines constituted a national industry which was largely popular, reputable and stable, not the visible manifestation of dishonest quackery as described later by doctors and many historians. Much of the distribution, promotion and sale of patent medicines was centrally controlled with directed advertising, specialisation, fixed prices and national procedures, and for the first time we can see the detailed working of a national market for a class of Georgian consumer goods. Furthermore, contemporaries were aware that changes in the consumers’ ‘imagination’ increased the benefits of patent medicines above the effects of their pharmaceutical components. As the imagination was altered by the printed word, print can be considered as an essential ingredient of patent medicines. This book will challenge the assumptions of all those interested in the medical, business or print history of the period.