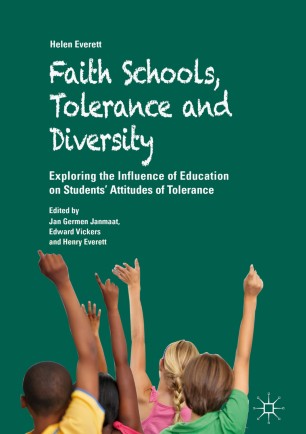 Exploring the Influence of Education on Students' Attitudes of Tolerance

This book examines the effects of faith schools on social cohesion and inter-ethnic relations. Faith schools constitute approximately one third of all state-maintained schools and two fifths of the independent schools in England. Nevertheless, they have historically been, and remain, controversial. In the current social climate, questions have been raised about the ability of faith schools to promote Community Cohesion and, included within that, their ability to promote tolerance. This book explores one aspect of the debate by examining the effect that faith schools have on their students’ attitudes of tolerance. As well as asking what differences exist between students in faith and non-faith schools, it also looks at which aspects of the schools might be affecting the students and their attitudes towards different minorities. The book is a must-read for students and researchers in the fields of education and religious studies, as well as anyone with an interest in the place of faith schools in a modern multicultural society.
Helen Everett was, at the time of her death, a Research Manager at the National Foundation for Educational Research. She had taught Science in a variety of English schools before doing her PhD at the UCL Institute of Education, UK, funded by an ESRC award.
Jan Germen Janmaat is Reader in Comparative Social Science at UCL Institute of Education, UK. His research focuses on the socio-cultural outcomes of education. He is co-editor of The Dynamics and Social Outcomes of Education Systems.
Edward Vickers is Professor of Comparative Education at Kyushu University, Japan. A specialist in the history and politics of education in contemporary East Asia, he is co-author (with Zeng Xiaodong) of Education and Society in Post-Mao China.
Henry Everett is the Vicar of St Mary Magdalene and St Peter, Paddington, and is co-author (with Paul Bradshaw and Colin Buchanan) of Coronations Past, Present and Future. He is currently writing on Christian and Muslim shrines. He was married to Helen for 26 years.