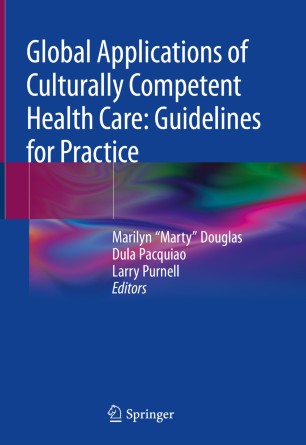 This book is unique in its global approach to applying the Guidelines for Culturally Competent Nursing Practice that were recently endorsed by the International Council of Nurses (ICN) and distributed to all of its 130 national nursing associations. The purpose of this book is to illustrate how these guidelines can be put into clinical practice and to show how practitioners from different countries with diverse populations can implement them.

The first chapter provides the conceptual basis for Culturally Competent Health Care and describes how the guidelines were developed. Each of the next 10 sections presents a chapter describing a specific guideline followed by three or four chapters with detailed case studies to illustrate how the guideline was implemented in a particular cultural setting. All case studies follow a similar format and are written by international authors with clinical expertise and work experience in the culture being presented.

This book will be useful for advanced practice nurses, healthcare students, clinicians, administrators, educators, researchers, and those who provide community health or population-based care.

Dr. Marilyn “Marty” K. Douglas, PhD, RN, FAAN earned her PhD (International and Cross Cultural Nursing) from the University of California, San Francisco, where she is currently Clinical Professor. Dr. Douglas served as Editor-in-Chief of the Journal of Transcultural Nursing for 15 years and co-edited the Core Curriculum for Transcultural Nursing and Health Care. She chaired the American Academy of Nurses (AAN) Task Force that developed the Guidelines for Culturally Competent Nursing Practice, which ultimately were endorsed by the International Council of Nurses. She also worked with the American Nurses Association to develop a new standard of practice, “Cultural Congruent Practice”.
Dr. Dula F. Pacquiao, EdD, RN, CTN-A, TNS obtained her EdD (Anthropology) from Rutgers University. She served as a Senior Editor of the Journal of Transcultural Nursing, the co-editor of the Core Curriculum for Transcultural Nursing and Health Care, co-author of the TCN certification exam, and member of the AAN Task Force on Guidelines for Culturally Competent Nursing Practice. She established two academic training centres for multidisciplinary students and healthcare professionals, which focus on culturally competent care and social determinants of health in vulnerable populations. She assisted in the development of the U.S. Office of Minority Health’s Culturally Competent Curriculum for Nurses and the National Quality Forum’s Framework for Culturally Competent Practice.
Dr. Larry D. Purnell, PhD, RN, FAAN obtained a PhD (Health Service Administration) from Columbia Pacific University. He served as Associate Editor of the Journal of Transcultural Nursing and a member of the AAN Task Force on Standards of Culturally Competent Nursing Practice. He developed one of the most popular models for cultural competence, the Purnell Model for Cultural Competence, which has been translated into 10 languages. He has been a prolific author on the topic of culture.