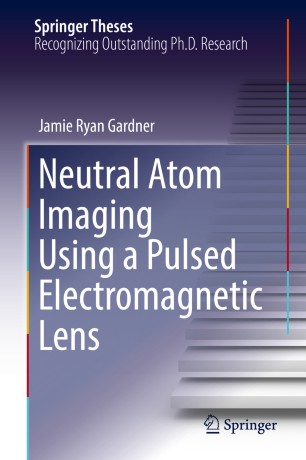 This dissertation describes the design, construction, and characterization of a new type of aberration-corrected, neutral-atom lens. Atom beam control plays a crucial role in many different fields, ranging from fundamental physics research and materials science to applied nanotechnology. Despite this, atom-optical elements like lenses and mirrors remain relatively underdeveloped compared to their counterparts in other optics fields. Although aberration correction is addressed quite comprehensively in photon and electron lenses, no credible research efforts have yet produced the same technology for neutral atoms.
This thesis reports on progress towards a neutral atom imaging device that will be useful in a range of applications, including nanofabrication and surface microscopy. It presents a novel technique for improving refractive power and correcting chromatic aberration in atom lenses based on a fundamental paradigm shift from continuous, two-dimensional focusing to a pulsed, three-dimensional approach. Simulations of this system suggest that it will pave the way towards the long-sought goal of true atom imaging on the nanoscale. The thesis describes the construction of a prototype lens, and shows that all of the technological requirements for the proposed system are easily satisfied. Using metastable neon from a supersonic source, the prototype was characterized for three different focal lengths and a diverse range of apertures. Despite some manufacturing imperfections, lower distortion and higher resolution than has been shown in any previous hexapole lens was observed. Comparison with simulations corroborates the underlying theory and encourages further refinement of the process.