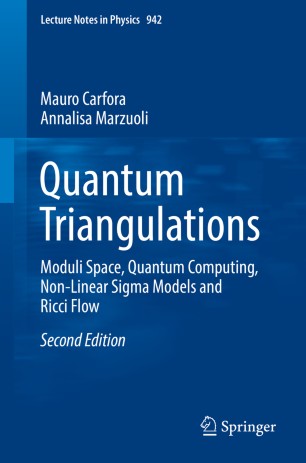 This book discusses key conceptual aspects and explores the connection between triangulated manifolds and quantum physics, using a set of case studies ranging from moduli space theory to quantum computing to provide an accessible introduction to this topic.

Research on polyhedral manifolds often reveals unexpected connections between very distinct aspects of mathematics and physics. In particular, triangulated manifolds play an important role in settings such as Riemann moduli space theory, strings and quantum gravity, topological quantum field theory, condensed matter physics, critical phenomena and complex systems. Not only do they provide a natural discrete analogue to the smooth manifolds on which physical theories are typically formulated, but their appearance is also often a consequence of an underlying structure that naturally calls into play non-trivial aspects of representation theory, complex analysis and topology in a way that makes the basic geometric structures of the physical interactions involved clear.

This second edition further emphasizes the essential role that triangulations play in modern mathematical physics, with a new and highly detailed chapter on the geometry of the dilatonic non-linear sigma model and its subtle and many-faceted connection with Ricci flow theory. This connection is treated in depth, pinpointing both the mathematical and physical aspects of the perturbative embedding of the Ricci flow in the renormalization group flow of non-linear sigma models. The geometry of the dilaton field is discussed from a novel standpoint by using polyhedral manifolds and Riemannian metric measure spaces, emphasizing their role in connecting non-linear sigma models’ effective action to Perelman’s energy-functional. No other published account of this matter is so detailed and informative.

This new edition also features an expanded appendix on Riemannian geometry, and a rich set of new illustrations to help the reader grasp the more difficult points of the theory. The book offers a valuable guide for all mathematicians and theoretical physicists working in the field of quantum geometry and its  applications.