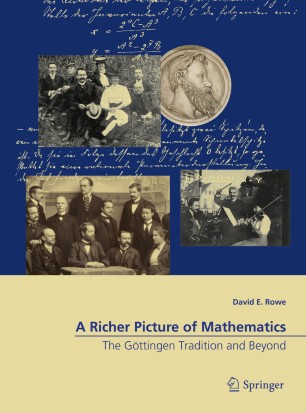 A Richer Picture of Mathematics

The Göttingen Tradition and Beyond

Historian David E. Rowe captures the rich tapestry of mathematical creativity in this collection of essays from the “Years Ago” column of The Mathematical Intelligencer. With topics ranging from ancient Greek mathematics to modern relativistic cosmology, this collection conveys the impetus and spirit of Rowe’s various and many-faceted contributions to the history of mathematics. Centered on the Göttingen mathematical tradition, these stories illuminate important facets of mathematical activity often overlooked in other accounts.
Six sections place the essays in chronological and thematic order, beginning with new introductions that contextualize each section. The essays that follow recount episodes relating to the section’s overall theme. All of the essays in this collection, with the exception of two, appeared over the course of more than 30 years in The Mathematical Intelligencer. Based largely on archival and primary sources, these vignettes offer unusual insights into behind-the-scenes events. Taken together, they aim to show how Göttingen managed to attract an extraordinary array of talented individuals, several of whom contributed to the development of a new mathematical culture during the first decades of the twentieth century.