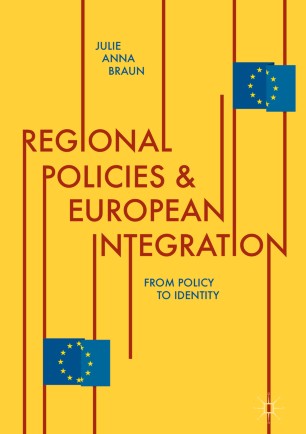 This book examines what role regions play in European (dis)integration and European identity building. Filling a glaring gap in our understanding of regions, the book considers what the scope and objectives of these regions’ respective European policies and programmes are, how diverse they are and, in a time of mixed signals of European cynicism and identity, how European identity is perceived, fostered and even promoted in regions’ European policies. In doing so, the book presents empirical findings on four EU regions as case studies, including Germany’s Brandenburg; Belgium’s Wallonia; France’s Nord-Pas de Calais; and last but certainly in the current context of Brexit not least, the South West of England.
Julie Anna Braun is Dahrendorf Postdoctoral Fellow at the Hertie School of Governance, Germany. Julie was a Fellow at the London School of Economics and Political Science, UK, and has taught at the LSE for five years. Prior to this, Julie worked as European Policy Stagiaire at the UK’s West Midlands office in Brussels and completed a political journalism traineeship at Inter Press Service.