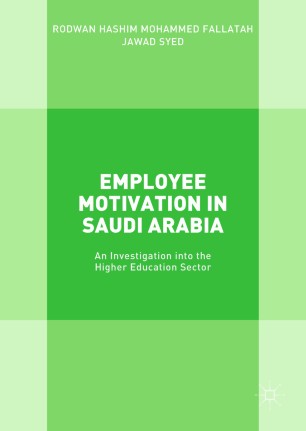 An Investigation into the Higher Education Sector

‘The authors explore how individual motivations in collectivistic societies such as Saudi Arabia may be different from those in individualistic Western societies.  They demonstrate how one such theory, the widely accepted Maslow’s hierarchy of needs, is bounded by culture, religion, and tradition, and has limited generalizability outside the West.’

‘This book contributes to motivation scholarship by putting the theory to test in an under-researched cultural context. Such an endeavour is more than welcome and highly topical in a context where people of Islamic faith and/or from the Middle East are all too often caricatured in the media and political arena, with little empirical knowledge available on which to base analysis.’

This book investigates the relevance of Maslow’s hierarchy of needs as a theory of motivation, whilst taking into account variances in culture and individual experiences and perspectives. Focussing on higher education, the book responds to the call for providing alternative conceptual models, other than those originating from the Anglo-Saxon world. The authors take a contextual approach and use the case of Saudi Arabia to understand motivation in a collectivist, highly religious and conservative society of the Middle East. Providing empirical findings from a study carried out at two Saudi universities differing in their religious outlook, this book reveals a hierarchy of needs that is significantly different from the theory proposed by Maslow. Religion, culture and gender are explored in detail as the authors investigate the relevance of Maslow’s theory in a region that is of growing interest to policy-makers and practitioners in North America and Europe, offering a truly insightful read to an international audience.