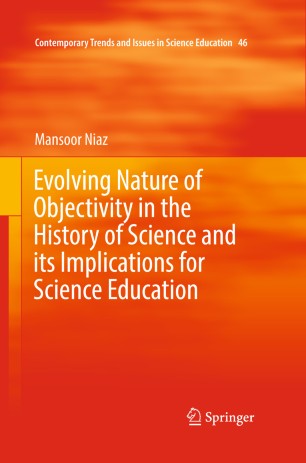 This book explores the evolving nature of objectivity in the history of science and its implications for science education. It is generally considered that objectivity, certainty, truth, universality, the scientific method and the accumulation of experimental data characterize both science and science education. Such universal values associated with science may be challenged while studying controversies in their original historical context. The scientific enterprise is not characterized by objectivity or the scientific method, but rather controversies, alternative interpretations of data, ambiguity, and uncertainty. Although objectivity is not synonymous with truth or certainty, it has eclipsed other epistemic virtues and to be objective is often used as a synonym for scientific.
Recent scholarship in history and philosophy of science has shown that it is not the experimental data (Baconian orgy of quantification) but rather the diversity / plurality in a scientific discipline that contributes toward understanding objectivity. History of science shows that objectivity and subjectivity can be considered as the two poles of a continuum and this dualism leads to a conflict in understanding the evolving nature of objectivity.
The history of objectivity is nothing less than the history of science itself and the evolving and varying forms of objectivity does not mean that one replaced the other in a sequence but rather each form supplements the others.

This book is remarkable for its insistence that the philosophy of science, and in particular that discipline’s analysis of objectivity as the supposed hallmark of the scientific method, is of direct value to teachers of science. Meticulously, yet in a most readable way, Mansoor Niaz looks at the way objectivity has been dealt with over the years in influential educational journals and in textbooks; it’s fascinating how certain perspectives fade, while basic questions show no sign of going away. There are few books that take both philosophy and education seriously – this one does!