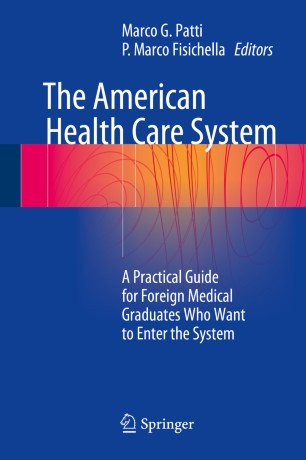 The book aims to provide essential information and guidance on how to navigate the American health care system. The characteristics of it are described in this concise and easy to read volume to help foreign medical graduates integrate into the American system.

P. Marco Fisichella was raised in Catania, Italy. After graduating from the University of Catania School of Medicine in 1994, he started a General Surgery Residency in Catania and he graduated in 2000. In 1999 he visited the Center for the Study of Gastrointestinal Motility and Secretion at the University of California San Francisco where he subsequently spent 2 years after completing his general surgery training in Italy. In 2000, he started a General Surgery Residency at the University of Illinois at Chicago. After completion of his residency in 2007, he started a fellowship in Minimally Invasive Surgery and Bariatrics at the University of California San Francisco. In 2008 he joined the faculty of the Department of Surgery of Loyola University, Stritch School of Medicine as Assistant Professor and the Director of the Swallowing Center. In 2013 he raised to the rank of Associate Professor. In 2014, he was named Associate Chief of Surgery at the Boston VA Healthcare System, Brigham and Women’s Hospital, Harvard Medical School.

Dr. Marco G. Patti, MD, FACS  is a general surgeon who specializes in gastrointestinal surgery, and particularly in esophageal surgery. He is presently a Professor in the Departments of Medicine and Surgery and is a Co-Director of the Center for Esophageal Diseases and Swallowing at the  University of North Carolina in Chapel Hill, North Carolina . In 2015,  he was named  President of the International Society of Surgery, which is the oldest international surgical association and President of the World Congress of Surgery in August 2017.