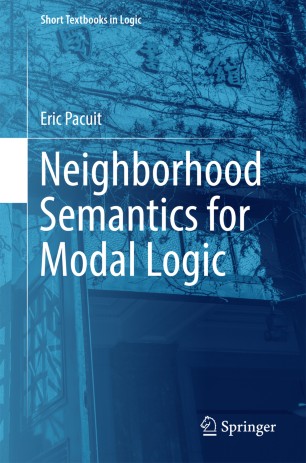 Part of the Short Textbooks in Logic book series (STXLO)

This book offers a state-of-the-art introduction to the basic techniques and results of neighborhood semantics for modal logic. In addition to presenting the relevant technical background, it highlights both the pitfalls and potential uses of neighborhood models – an interesting class of mathematical structures that were originally introduced to provide a semantics for weak systems of modal logic (the so-called non-normal modal logics).
In addition, the book discusses a broad range of topics, including standard modal logic results (i.e., completeness, decidability and definability); bisimulations for neighborhood models and other model-theoretic constructions; comparisons with other semantics for modal logic (e.g., relational models, topological models, plausibility models); neighborhood semantics for first-order modal logic, applications in game theory (coalitional logic and game logic); applications in epistemic logic (logics of evidence and belief); and non-normal modal logics with dynamic modalities.
The book can be used as the primary text for seminars on philosophical logic focused on non-normal modal logics; as a supplemental text for courses on modal logic, logic in AI, or philosophical logic (either at the undergraduate or graduate level); or as the primary source for researchers interested in learning about the uses of neighborhood semantics in philosophical logic and game theory.