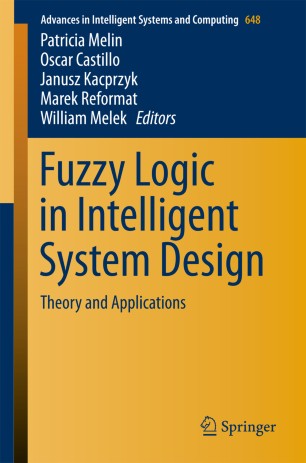 Part of the Advances in Intelligent Systems and Computing book series (AISC, volume 648)

This book describes recent advances in the use of fuzzy logic for the design of hybrid intelligent systems based on nature-inspired optimization and their applications in areas such as intelligent control and robotics, pattern recognition, medical diagnosis, time series prediction and optimization of complex problems. Based on papers presented at the North American Fuzzy Information Processing Society Annual Conference (NAFIPS 2017), held in Cancun, Mexico from 16 to 18 October 2017, the book is divided into nine main parts, the first of which first addresses theoretical aspects, and proposes new concepts and algorithms based on type-1 fuzzy systems. The second part consists of papers on new concepts and algorithms for type-2 fuzzy systems, and on applications of type-2 fuzzy systems in diverse areas, such as time series prediction and pattern recognition. In turn, the third part contains papers that present enhancements to meta-heuristics based on fuzzy logic techniques describing new nature-inspired optimization algorithms that use fuzzy dynamic adaptation of parameters. The fourth part presents emergent intelligent models, which range from quantum algorithms to cellular automata. The fifth part explores applications of fuzzy logic in diverse areas of medicine, such as the diagnosis of hypertension and heart diseases. The sixth part describes new computational intelligence algorithms and their applications in different areas of intelligent control, while the seventh examines the use of fuzzy logic in different mathematic models. The eight part deals with a diverse range of applications of fuzzy logic, ranging from environmental to autonomous navigation, while the ninth covers theoretical concepts of fuzzy models