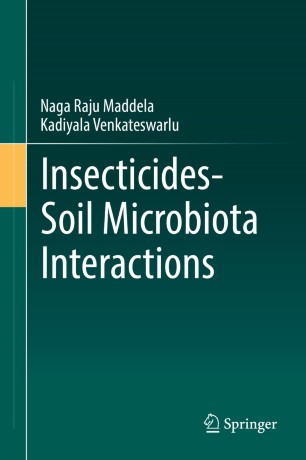 This book provides information about the nontarget nature of selected soil enzymes which are implicated in soil fertility and health and the methods for their assay. It also shows how these soil enzymes are affected by two different pesticides, buprofezin and acephate, used both extensively and intensively in modern agriculture.

Dr. Maddela Naga Raju received his PhD in Microbiology from Sri Krishnadevaraya University, Anantapur, India in 2012.  His area of research has been Environmental Microbiology. During his doctoral program, he investigated the effects of industrial effluents/insecticides on soil microorganisms and their biological activities. He worked as faculty in Microbiology for 13 years, teaching undergraduate and postgraduate students. He has published 30 research papers including one book in SpringerBriefs. He pursued postdoctoral research in Ecuador, and is currently working as a postdoctoral research fellow in China. He ha

ntapur, India until 2011, where he taught General Microbiology, Microbial Genetics, Molecular Biology and Genetic Engineering, and served as Dean, Faculty of Life Sciences, and Professor-in-Charge of Biotechnology Department. He has authored more than 140 research publications (with 2500 citations), largely in the area of environmental pollutants – soil microflora interactions, in leading scientific journals of international repute.  He edited two text books for BSc students.  He guided 12 students for the award of PhD degree, and 8 for MPhil degree. He received the Andhra Pradesh State Universities Meritorious Teacher Award in 2005, and was elected a Fellow of the National Academy of Agricultural Sciences (FNAAS), and the Academy of Microbiological Sciences (FAMSc), both in 2008.  He is the recipient of Commonwealth Academic Staff Fellowship from the British Council (UK) in 1989, Visiting Senior Research Associateship from the National Research Council (USA) in 1995 and 2001, and Endeavour Executive Award from the Government of Australia in 2010.  He served as an editor of the Indian Journal of Microbiology.