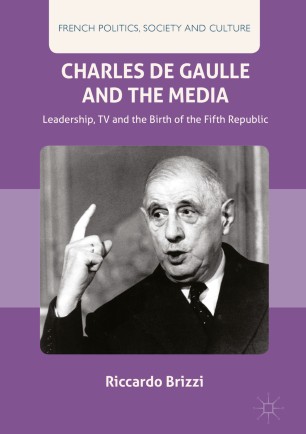 Charles De Gaulle and the Media

Leadership, TV and the Birth of the Fifth Republic

This book explores Charles De Gaulle's use and strict control of television between 1958 and 1969, highlighting the association between charismatic power and television with regards to legitimizing the Gaullist leadership and determining an evolution towards presidentialism during the Fifth Republic. A protagonist of European political history of the twentieth century, Charles de Gaulle was a pioneer in the use of mass media: in the Second World War he had earned the nickname of Général-micro due to his reliance on radio communication; in 1958 he then started an substantive and fruitful use of television, which some of his opponents labelled as ‘telecracy’. From difficult beginnings, where he followed the advice of publicity and communication experts, through his masterful TV appearances during the dramatic moments of the Algerian War, to the presidential campaign of 1965 and the crisis of May 1968, the author paints a compelling fresco of de Gaulle as the first TV

leader in contemporary European history. The book will appeal to students and scholars interested in the fields of French politics, political communication and political leadership.