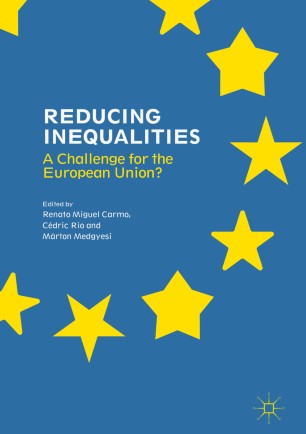 A Challenge for the European Union?

Reducing Inequalities has been written by leading academics in the field who describe the current social situation in the European Union, focussing on inequality from a multidimensional perspective that includes income, poverty, social exclusion, education. The authors argue that social issues such as these have become national prerogatives for countries within the European Union. In response they ask: How does the European Union engage with inequality today? What principles of social solidarity ought to be applied between states and citizens of the European Union? What should be the role of European Union and its institutions regarding the challenge of reducing inequality?

This book will be of interest to anyone seeking to understand inequality as a multidimensional concept, rather than solely as an economic phenomenon, across different geographical and historical contexts.

Renato Miguel Carmo is a Research Fellow at the Centre for Research and Studies in Sociology (CIES-IUL) and Assistant Professor at the University Institute of Lisbon (ISCTE-IUL), Portugal. He is Director of the Observatory of Inequalities and member of the European research network, Inequality Watch. Issues such as social and spatial inequalities, public policy, mobilities and social capital have been at the core of his research projects.

Cédric Rio is a philosopher specialised in social justice and inequality and he is currently a researcher at the Centre Maurice Halbwachs (CNRS/EHESS/ENS) in France. He is the coordinator of Inequality Watch, an independent European research network.

Márton Medgyesi is Senior Researcher at both the TARKI Social Research Institute, Hungary and at the Institute for Sociology, Centre for Social Sciences at the Hungarian Academy of Sciences. He holds an MSc in Applied Economics from Sciences Po, France and a PhD in Sociology from Corvinus University of Budapest, Hungary.

“The book discusses the issue from different perspectives using various indicators such as income and economic inequalities, poverty and social exclusion, categorical inequalities and social class and educational inequalities. … It is an interesting read for all irrespective of ones’ educational background – and for those who want to know more about the challenges relating to inequality that Europe currently faces.” (Abhishek, European Journal of Social Security, Vol. 21(1), 2019)