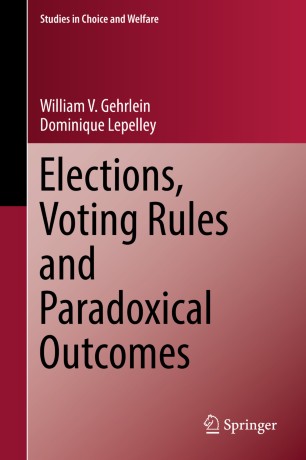 Part of the Studies in Choice and Welfare book series (WELFARE)

This monograph studies voting procedures based on the probability that paradoxical outcomes like the famous Condorcet Paradox might exist. It is well known that hypothetical examples of many different paradoxical election outcomes can be developed, but this analysis examines factors that are related to the process by which voters form their preferences on candidates that will significantly reduce the likelihood that such voting paradoxes will ever actually be observed. It is found that extreme forms of voting paradoxes should be uncommon events with a small number of candidates. Another consideration is the propensity of common voting rules to elect the Condorcet Winner, which is widely accepted as the best choice as the winner, when it exists. All common voting rules are found to have identifiable scenarios for which they perform well on the basis of this criterion. But, Borda Rule is found to consistently work well at electing the Condorcet Winner, while the other voting rules have scenarios where they work poorly or have a very small likelihood of electing a different candidate than Borda Rule. The conclusions of previous theoretical work are presented in an expository format and they are validated with empirically-based evidence. Practical implications of earlier studies are also developed.