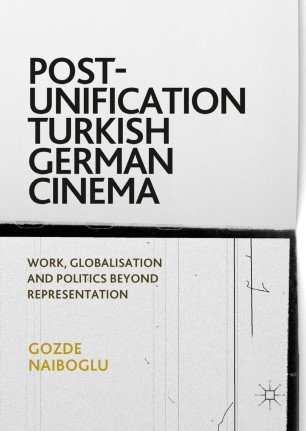 Work, Globalisation and Politics Beyond Representation

This book examines post-Unification Turkish German cinema with a focus on ethics, affectivity and labour. Shifting the focus from the longstanding concerns of integration, identity and cultural conflict, the author argues that these films no longer emphasise the conflicts between migrants and citizens. By offering new expressions of lived experience under late capitalism through themes of work, unemployment, insecurity and illegal work, social reproduction, exhaustion and precarity, the films call for a rethinking of the established ideas of class, community and identity.

As the first English-language monograph to focus on Turkish German Cinema, the book offers analyses of films by Thomas Arslan, Christian Petzold, Aysun Bademsoy, Seyhan Derin, Harun Farocki, Yüksel Yavuz and Feo Aladag. By calling into question the limitation of identity-oriented approaches to migrant filmmaking, Naiboglu offers a post-representational approach to a range of works including features films, documentaries and video that deal with labour migration from Turkey to Germany.

Gozde Naiboglu is Lecturer in Film Studies at the University of Leicester, UK. Her publications have appeared in journals including Studies in European Cinema, Screen and Film Criticism. Her research interests include non-representational approaches to film and screen media, contemporary European Cinema, gender and sexuality studies, feminist materialisms and affect theory.

“Post-Unification Turkish German Cinema breaks new ground for the field of migrant film studies. Working through a broad range of post-unification fiction and documentary films, Gozde Naiboglu convincingly shows what is to be gained for our understanding of such films when approaching them not through the frameworks of representation, but by taking seriously such films’ capacity to generate affect and thus to participate in the constitution of contemporary social processes. What emerges from this methodological shift is how these films posit work as a “superior agential power” that links films by Thomas Arslan, Aysun Bademsoy, Harun Farocki and others to a broader context of European art cinema. Naiboglu’s carefully observed and well-researched analyses demonstrate how these post-Wall filmmakers redefine affective states such as fatigue and exhaustion as a vital corporeal force bearing the potential to resist neoliberal conditions of production and subjectivation.” (Marco Abel, Professor of English and Film Studies at the University of Nebraska, USA)

“Gozde Naiboglu’s Post-Unification Turkish German Cinema: Work, Globalisation and Politics Beyond Representation is the book many of us have been waiting for. It breaths fresh air into a stalled discourse by connecting labour—the central concern of late twentieth-century migrants from Turkey to West Germany—to twenty-first century issues of global politics. Such an innovative approach produces exciting and dynamic scholarship on contemporary Turkish German cinema.” (Barbara Mennel, Associate Professor of German Studies and Cinema Studies, University of Florida, USA. Co-Editor of Turkish German Cinema for the New Millennium: Sites, Sounds, and Screens, 2012)