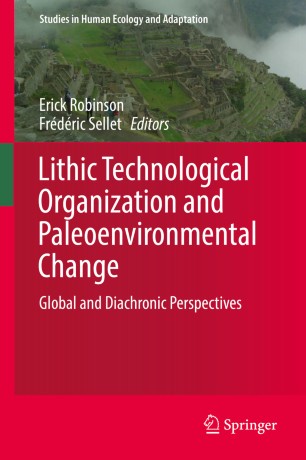 Part of the Studies in Human Ecology and Adaptation book series (STHE, volume 9)

The objective of this edited volume is to bring together a diverse set of analyses to document how small-scale societies responded to paleoenvironmental change based on the evidence of their lithic technologies. The contributions bring together an international forum for interpreting changes in technological organization - embracing a wide range of time periods, geographic regions and methodological approaches.​ ​As technology brings more refined information on ancient climates, the research on spatial and temporal variability of paleoenvironmental changes. In turn, this has also broadened considerations of the many ways that prehistoric hunter-gatherers may have responded to fluctuations in resource bases.   From an archaeological perspective, stone tools and their associated debitage provide clues to understanding these past choices and decisions, and help to further the investigation into how variable human responses may have been.   Despite significant advances in the theory and methodology of lithic technological analysis, there have been few attempts to link these developments to paleoenvironmental research on a global scale.

Erick Robinson is a postdoctoral researcher in the Department of Anthropology at the University of Wyoming. He specializes in geochronology, lithic technology, and paleodemography, focusing on hunter-gatherer adaptations to terminal Pleistocene and Holocene environmental change and transitions to agriculture in northern Europe and Western US. He is currently working to develop a comprehensive archaeological radiocarbon database for the US that will be used to reconstruct prehistoric population growth and migration throughout the Holocene.
Frederic Sellet