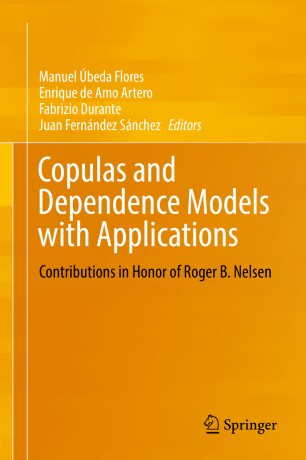 Copulas and Dependence Models with Applications

Contributions in Honor of Roger B. Nelsen

This book presents contributions and review articles on the theory of copulas and their applications. The authoritative and refereed contributions review the latest findings in the area with emphasis on “classical” topics like distributions with fixed marginals, measures of association, construction of copulas with given additional information, etc. The book celebrates the 75th birthday of Professor Roger B. Nelsen and his outstanding contribution to the development of copula theory. Most of the book’s contributions were presented at the conference “Copulas and Their Applications” held in his honor in Almería, Spain, July 3-5, 2017.

The chapter 'When Gumbel met Galambos' is published open access under a CC BY 4.0 license.

Enrique de Amo Artero is Associate Professor of Mathematical Analysis at the Department of Mathematics at the University of Almería, Spain. He studied at the University of Granada, Spain, where he obtained his doctoral degree in Mathematics in 1994.  He is Principal Investigator of the research project “Applications of Measure Theory and Copula Theory. Construction of Stochastic Models", supported by the Ministry of Economy and Competitiveness of the Spanish Government. His fields of interest and research are finite measure theory, fractal theory, and copula theory.

Fabrizio Durante is Full Professor of Mathematical Methods of Economics, Finance and Actuarial Sciences at the University of Salento, Lecce, Italy. From 2006 until 2010, he worked at the Johannes Kepler University Linz, Austria, where he obtained his habilitation in Mathematics in 2010. From 2010 to 2016 he worked as Assistant and, subsequently, Associate Professor of Statistics at the Free University of Bozen-Bolzano, Italy. His research activities focus on the fields of dependence and copula models, with particular emphasis on applications in financial risk management, reliability theory, and environmental science (especially hydrology). He is author (together with Carlo Sempi) of the monograph “Principles of Copula Theory”, and he co-edited three books devoted to copula theory and its applications published by Springer. Currently, he is Associate Editor of the journal “Computational Statistics and Data Analysis", “Dependence Modeling" and “Statistical Methods and Applications”.